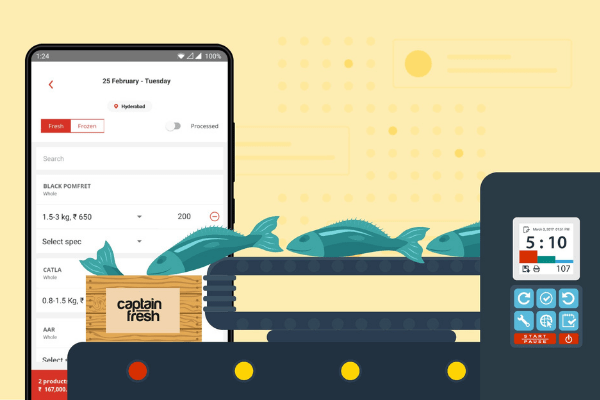 Captain Fresh, a B2B seafood and meat marketplace raised $50 million in a round led by existing investors Prosus Ventures and Tiger Global.

The round was also attended by Accel India, Matrix Partners India, Ankur Capital, and Incubate Fund. This is the organization’s second fundraising attempt in three months.

According to Utham Gowda, co-founder and CEO of Captain Fresh, the company’s worth has more than doubled to $500 million due to the investment round.

A strategic investor is anticipated to provide an additional $10 million, a source said.

The new funds will mostly be used for acquisitions, he said.

“We are looking at various assets which are critical in the global supply chain,” he said. “We are shoring up capital for that purpose. These are mostly distribution focussed assets.”

Captain Fresh was established in 2019 as a seafood marketplace with the goal of aggregating the country’s fragmented retail demand and connecting it to small fishermen and farmers.

On the back-to-back funding round, Gowda stated that the company’s “business quality” had improved dramatically over the previous quarter and that the annualized revenue run rate for the year had doubled since December.

“On the supply side, from a seafood marketplace, they are now entering into the larger animal protein industry,” said Ashutosh Sharma, head of investments, India, at Prosus Ventures. “On the demand side as well, they have expanded their focus by adding new export markets.”

According to Gowda, the company has made substantial progress in exports since December, with about 20% of its revenue now coming from markets outside India.

The company’s main export markets include the United States, European markets, and West Asian countries. The firm stated that it would expand into Africa and other Asian areas.

“We have increased our addressable market significantly,” he said. “Last quarter we just had plans for the export market, now there are early signs that we can deliver… We continue to attract capital.”

The company said in a statement that its “vision has now expanded to build a sizeable animal protein platform with a play across multi-channel, multi-geography, multi-specie and multi-format retail (fresh/frozen/live).”