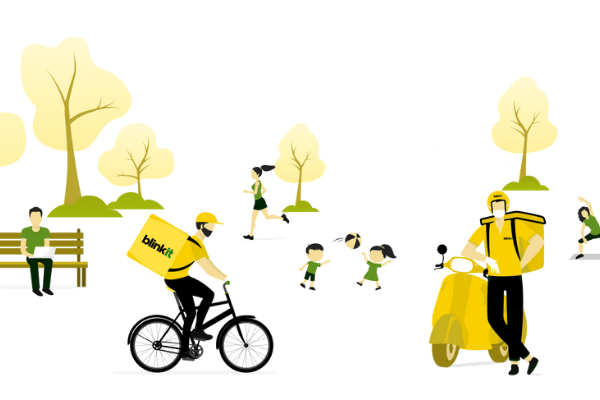 Blinkit, an online grocer, has introduced 200 “dark stores” that only deliver in ten minutes since December. By March, the Gurgaon-based company hopes to have 1,000 of these mini distribution centres.

MilkBasket, which is owned by Reliance Retail, is expanding its warehousing capacity in the National Capital Region to roughly 350,000 square feet to handle 150,000 orders per day, which is more than double the existing order size.

While numerous physical stores and dine-in restaurants in India are putting their expansion plans on hold due to a surge in Covid-19 cases, online grocers such as Blinkit, BigBasket, and MilkBasket are making an aggressive push to take advantage of the growing demand for speedy online delivery.

To be sure, as the pandemic raged in the last two years, millions of Indians flocked to digital commerce, propelling online food platforms to new heights. However, the current third wave in India has prompted them to become even more aggressive.

“One thing has changed in this wave is that our pace of expansion has doubled,” said Rohit Sharma, head of the supply chain at Blinkit.

Until December, Blinkit had roughly 300 dark stores; it has since added 200 more, each covering about 3,000 square feet. “We will double the number of dark stores to 1,000 by March,” Sharma said.

Blinkit, which currently operates in around 40 cities, is expanding into the eastern region, including Punjab, Bhopal, and Nashik.

Blinkit’s competitor, Tata-owned BigBasket, plans to introduce BB Now, a rapid delivery service that will deliver products in 10 to 20 minutes. Blinkit, Swiggy’s Instamart, Dunzo, and Zepto are now operating in that space.

BigBasket’s chief operating officer, TK Balakumar, said the company plans to double its existing warehousing capacity and open more than 300 dark stores in the coming fiscal year, beginning in April. “This will lead to increasing our number of orders from the current 300,000 to 500,000-plus per day,” he said.

Orders in various cities have increased by 30-40% during this round of the Covid wave, according to online grocers. In the NCR, MilkBasket presently serves roughly 70,000 orders every day. It will open its new 150,000-square-foot warehouse in the region next month.

“There is excess demand,” said a person familiar with MilkBasket’s plans. “They are already running 110% of capacity.”

MilkBasket is currently available in Delhi-NCR, Hyderabad, Bengaluru, and Chennai, with plans to expand into Jaipur later this month.